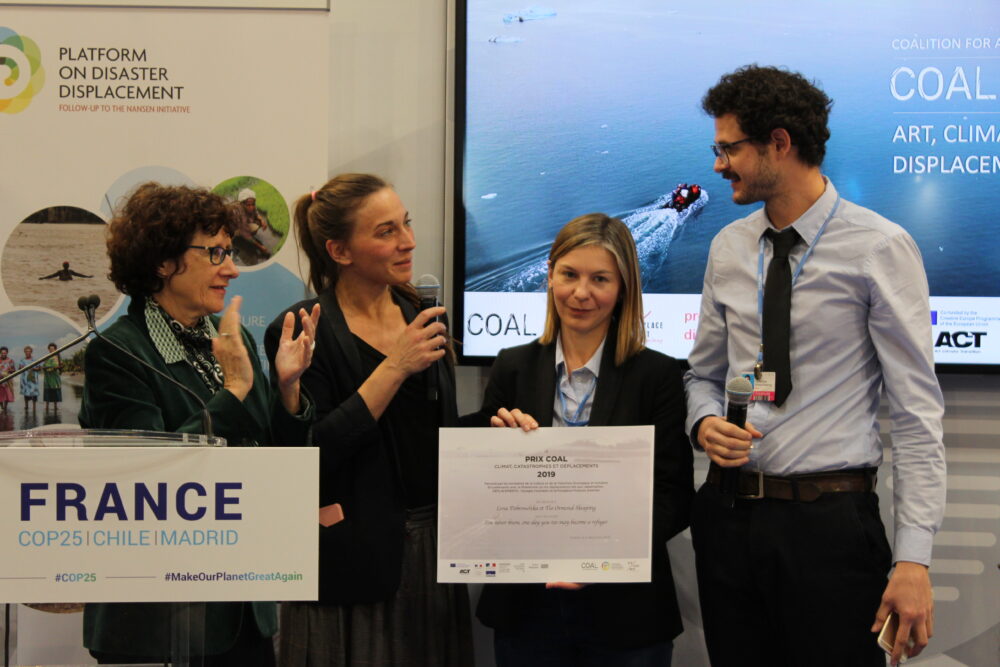 Madrid, Spain, 5 December 2019 –  Yesterday, in the heart of the United Nations Conference on Climate Change (COP25), the French Ambassador for Climate, Brigitte Collet presented the 2019 Coalition for Art and Sustainable Development (COAL) Art and Environment Prize to artists Lena Dobrowolska and Teo Ormond-Skeaping for their project You never know, one day you too may become a refugee. For this year’s special edition, the 2019 COAL Prize addresses the theme of climate, disasters and displacement.

“Unfortunately, climate change is not a distant or theoretical concept, but a terrible reality. It is essential that the art world is able to participate in our efforts to mobilize and raise awareness about displacement related to disasters and climate change. Artists should be welcomed to use their talent and put it to work on themes that are absolutely crucial not only for the future of our planet, but also for our humanity. By pulling us out of the technicalities of negotiations, which are often disconnected from reality, the artists’ works expand our capacity for understanding and reflection. For this, I thank them,” said the ambassador in her statement at the French Pavilion.

Since 2009, an estimated one person per second is displaced following sudden-onset disasters. Disasters such as droughts, floods, earthquakes and tsunamis have left many victims without shelter, clean water and other basic necessities. Meanwhile, slow-onset events, such as desertification and sea level rise, also force people out of their homes. Environmental issues are often intrinsically linked to the same political, economic and social factors that cause displacement.

Tackling the enormous challenges we face begins with making them visible.  This is why the Platform on Disaster Displacement (PDD), chaired by France, the art project DISPLACEMENT: Uncertain Journeys, and the Coalition for Art and Sustainable Development (COAL) have partnered to honor artists from around the world who are bearing witness, imagining, experimenting and working to create a world that pays more attention to ecological balance and climate justice.

Through their creations, artists can encourage policymakers to understand and act on the reality of displacement caused by climate change. This collaboration creates a platform for exchange between artists and policymakers during the first week of the 25th United Nations Climate Conference (COP25) in Madrid. Thus, the ceremony honoring the prize winners was complemented by a number of events presenting the work of the ten 2019 COAL prize finalists at the French Pavilion from 3-5 December.

“Art plays a very important role in how we address the issue of people displaced by the impacts of climate change. Art forces us to look at displacement from the perspective of human beings, and not only as negotiators at COP25. This is the power of art. It speaks to the heart, it evokes emotion,” insisted Saleem Huq from the International Center for Climate Change and Development (ICCCAD) following the projection of the film of the 2019 COAL Prize winners.

“These artists challenge us in a striking way. They remind us that it isn’t just about meetings, speeches and documents. It is ultimately about families, youth, children and older people whose lives have been turned upside down by floods, cyclones, drought, desertification and sea-level rise,” said Madeline Garlick from UNHCR during the event.

For Dina Ionesco of IOM, the conclusion was the same: “It is easy to talk about environmental migration in terms of laws, technical issues, statistics and politics. But art can push us to have a much deeper, more nuanced understanding of the issue.”

You never know, one day you too may become a refugee — Winning project by Lena Dobrowolska and Teo Ormond-Skeaping

“You never know, one day you too may become a refugee”, said a senior civil servant in Uganda about its migration policy. Although it faces some of the highest poverty levels in the world, Uganda has welcomed over 1.3 million refugees in the last two years. This is one of the many examples of generosity shown by countries that are most threatened by climate change, which also lead the way in developing, introducing and negotiating progressive migration policies and constitutional laws related to climate change. Such efforts contrast starkly to the increasingly restrictive immigration practices in the world’s richest countries. But times are changing, and those who have been spared to date could soon become “refugees” themselves.

In the speculative future imagined by the artists, violent meteorological phenomena and rising sea levels have displaced an increasing number of people in the world. Well-established migration routes are inverted, with numerous residents of the Global North seeking refuge in the Global South. Lena Dobrowolska and Teo Ormond-Skeaping wish to create a docu-drama that retraces the steps of a white, middle-class family displaced to Africa or South America following a disaster.

Their fictional universe is designed as a tool for raising awareness, sharing knowledge, and engaging in dialogue about displacement and migration. The artists plan to organize events at major climate conferences, in schools and in arts centers where people can come together to imagine future scenarios through a film screening, opportunities for exchange, a photographic exhibition, fictional documents and workshops. In doing so, they highlight our shared vulnerability in the face of climate change and remind us how essential generosity and inclusion are to our survival.

“We always intended to present our work to negotiators and policymakers – something that simply would not be possible without collaborations like these. As artists, we have the ability to imagine the futures that you have the power to shape with policy. It is no longer acceptable to just imagine a future that is habitable; we as artists and you as policymakers must now work together to build it,” concluded the prize winners.

FLATFORM (Italy), That which is to come is just a promise

Lena Dobrowolska and Teo Ormond-Skeaping (Poland/United Kingdom), You never know, one day you too may become a refugee

Learn more about our partners the COAL Prize and DISPLACEMENT: Uncertain Journeys