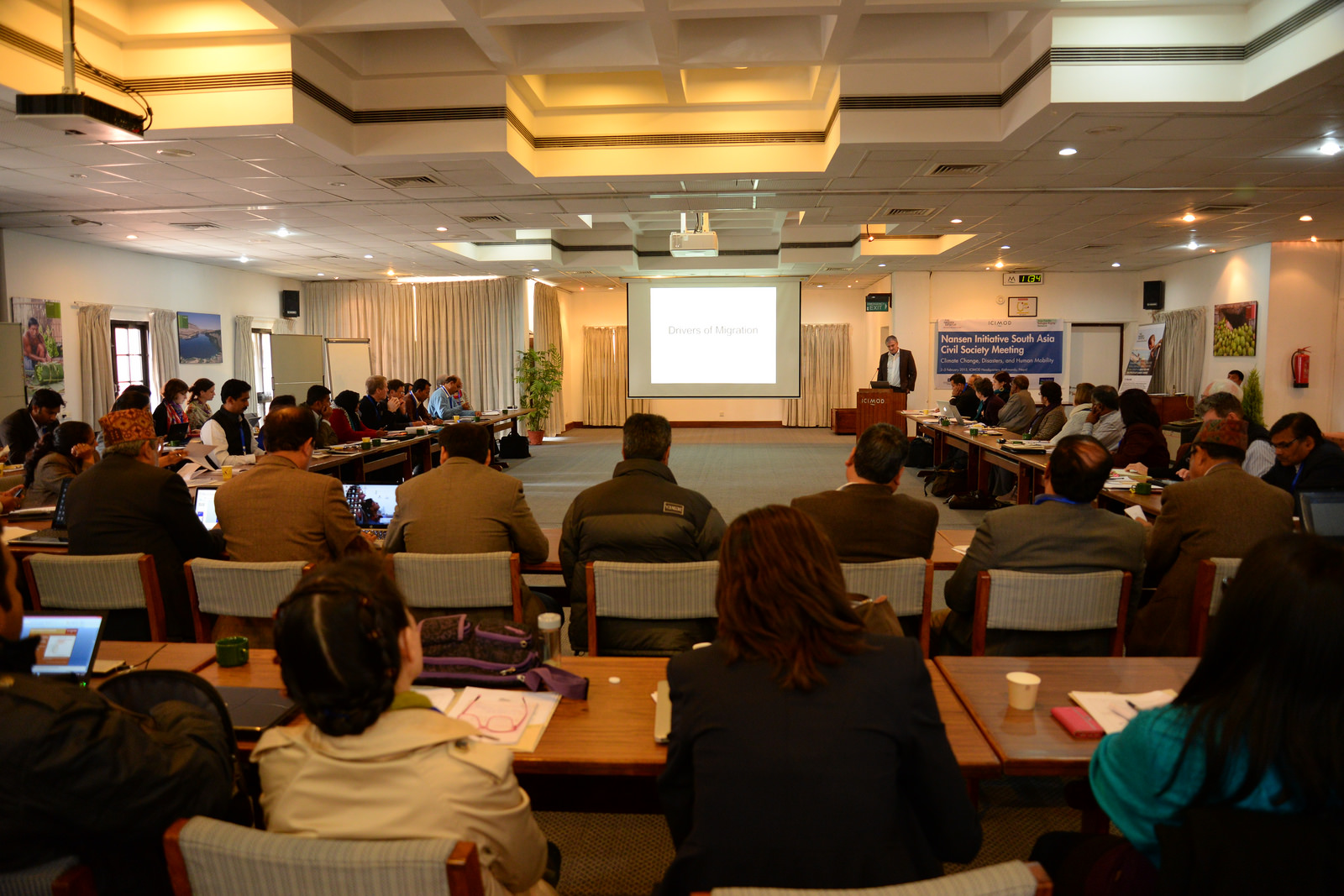 Kathmandu, Nepal, 2-3 February 2015 – Closing Remarks by H. E. Mr. Kjell Tormod Pettersen, Norwegian Ambassador to Nepal Nansen Initiative Civil Society Meeting: Climate Change, Disasters, and Human Mobility in South Asia Kanchenjunga Hall, ICIMOD HQ, Kathmandu, Nepal February 2-3, 2015 On behalf of the Chairmanship of the Nansen Initiative, the Governments of Norway and Switzerland, I would like to start these concluding remarks by thanking all of you, beginning with:

We are very grateful for your hospitality and for your support in organizing the fifth Civil Society meeting of the Nansen Initiative on Climate Change, Disasters, and Human Mobility in South Asia, here in Kathmandu, Nepal. From a Norwegian perspective, there is a clear linkage between the mandate of ICIMOD and the Nansen initiative. We are very concerned about possible consequences of climate change and pursuing a policy to gather knowledge and science based information to prepare for needed actions. I would also like to thank all of you that have travelled from Afghanistan, Bangladesh, China, India, the Maldives, Myanmar, Nepal, Pakistan, Sri Lanka, and Thailand. The active participation and contribution of the UN High Commissioner for Refugees (UNHCR) and the International Organization for Migration in various panels, is also highly appreciated. Each one of you has contributed actively to a successful outcome of the meeting. We have seen and learned that countries in South Asia are exposed to a wide array of natural hazards that can trigger human mobility including sudden-onset tropical cyclones, flash floods, earthquakes, tsunamis, landslides, avalanches and glacial lake outburst floods, as well as slow-onset desertification and droughts. We have learned much more about this dynamic of human mobility in the region in the context of disasters and climate change:

Thus, the future is likely to present the South Asian region with unprecedented challenges in preparing for this scenario and to cope with its consequences, including increased displacement and human mobility. Many of these challenges are also trans-boundary and global. To address them, communities and countries need to cooperate and work across borders in the region. In that respect, this meeting and the regional approach of ICIMOD is one of the best ways forward to effectively address the challenges disasters and climate change pose for livelihood and settlements, including in the Hindu-Kush Himalayas region. But not everything is bleak. We have also seen that better preparedness, disasters risk reduction and climate change adaptation efforts can make a difference for the resilience and adaptive capacity of people, whether they are able to stay, or will be moving. Better planning and preparedness can make a difference. We have also heard about good practices that allow people to stay and that can mitigate some of effects of floods and other hazards, when they are unavoidable. We have also learned that in certain contexts – to move – migration as an adaptation strategy to climate change may – increase one’s adaptive capacity. The protection environment for people displaced internally and across borders in this region is precarious. In the likelihood of further environmental degradation linked to climate change, communities and governments need to prepare for the fact that more people will be on the move, also across borders. We have heard that migrants may not fare well in other countries in situations of disasters and distress, such as in the Maldives. We also know that women and children in particular are vulnerable to trafficking, violence and abuse when they are on the move and crossing borders. This dark side of human mobility also requires concerted efforts from communities, governments and the International community. We welcome many of the innovative recommendations you have put forward in this meeting to address these challenges. What you have been discussing here will be brought forward in the Nansen Initiative process. First, this South Asian Civil Society Meeting will contribute to discussions in the next South Asian inter-governmental Regional Consultation hosted by the Government of Bangladesh in April 2015. And then, In October 2015 the results of the Nansen Initiative Regional Consultations and Civil Society Meetings will be consolidated and discussed at a global inter-governmental meeting in Geneva, Switzerland to discuss a Protection Agenda for cross-border displacement in the context of disasters. You efforts, input and contributions are part of similar meetings we have held with civil society in the Pacific, Central America, Horn of Africa, and Southeast Asia, all of them contributing clearly to a better, more relevant and more people centred protection agenda for people displaced in the context of disaster and the adverse effect of climate change. I thank you all for your contribution to these efforts, and before I close I would in particular reiterate our appreciation on behalf of the Chairmanship of the Nansen Initiative, the Government of Switzerland and Norway, to ICIMOD and Asia Pacific Refugee Rights Network for jointly organizing this Civil Society Meeting and especially ICIMOD for hosting us. We are also very grateful to Ms Kelly Flynn for steering us through this meeting with strong and excellent facilitation skills and for taking the time to come here to Kathmandu. A final word of appreciation goes to Professor Walter Kaelin, for representing the Chairmanship as Envoy of the Nansen Initiative, so well.

Nansen Initiative Pacific Regional Consultation Chair’s Summary Over the past two days, we have had…