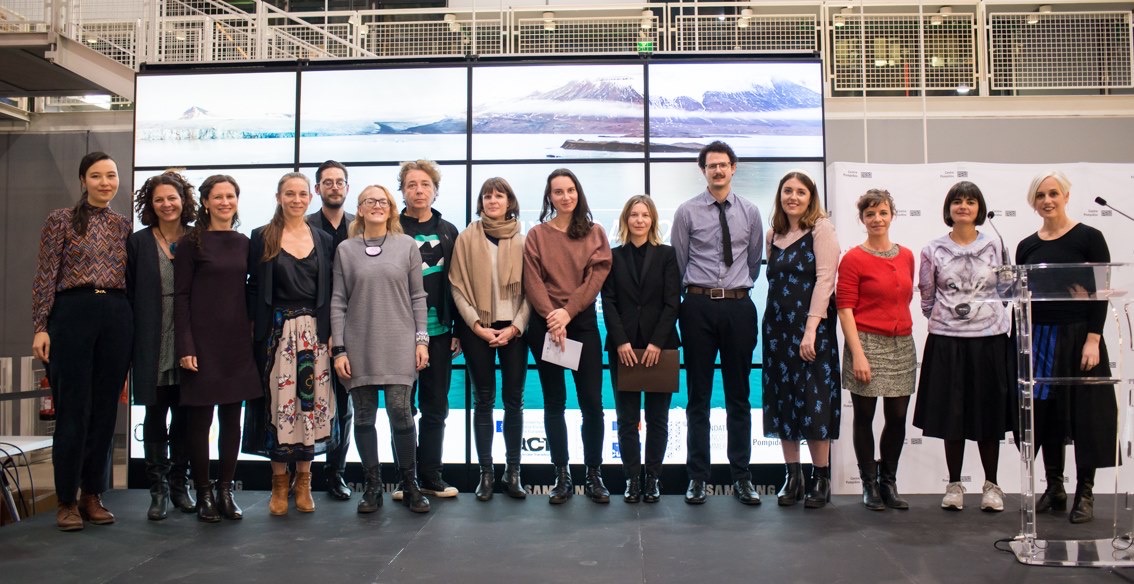 Artistic duo Lena Dobrowolska and Teo Ormond-Skeaping were awarded the COAL Prize on Thursday for their project You never know, one day you too may become a refugee during a ceremony organized at the Georges Pompidou Center in Paris, in the presence of Serge Lasvignes, President of the Georges Pompidou Center, ten nominated artists, members of the jury, Mariam Traoré Chazalnoel from the International Organization for Migration (OIM), as well as the Platform on Disaster Displacement and DISPLACEMENT: Uncertain Journeys, associated with this special edition on Climate, Disasters and Displacement. 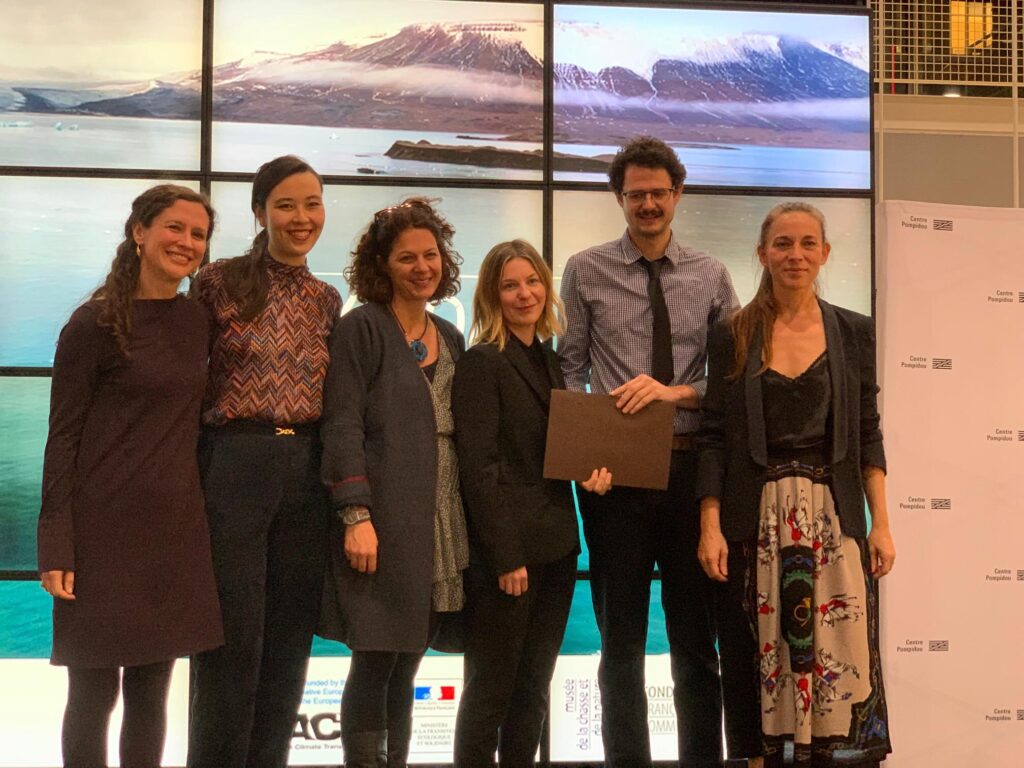 The 2019 COAL Prize – CLIMATE, DISASTERS AND DISPLACEMENT, will also celebrated at the COP25 in Madrid

A ceremony in honor of the laureates and several interventions around the ten nominated projects will also take place during the 25th International Climate Conference (COP25) in Madrid. In particular, the Government of France, which assumed the chair of the Platform on Disaster Displacement last July, will be hosting events in the French Pavilion on 3, 4 and 5 December.

You never know, one day you too may become a refugee

“You never know, one day you too may become a refugee”, said a senior civil servant in Uganda about its migration policy. Although it faces some of the highest poverty levels in the world, Uganda has welcomed over 1.3 million refugees in the last two years. This is one of the many examples of generosity shown by countries that are most threatened by climate change, which also lead the way in developing, introducing and negotiating progressive migration policies and constitutional laws related to climate change. Such efforts contrast starkly to the increasingly restrictive immigration practices in the world’s richest countries. But times are changing, and those who have been spared to date could soon become “refugees” themselves.

In the speculative future imagined by the artists, violent meteorological phenomena and rising sea levels have displaced an increasing number of people in the world. Well-established migration routes are inverted, with numerous residents of the Global North seeking refuge in the Global South. Lena Dobrowolska and Teo Ormond-Skeaping wish to create a docudrama that retraces the steps of a white, middle-class family displaced to Africa or South America following a disaster.

Their fictional universe is designed as a tool for raising awareness, sharing knowledge, and engaging in dialogue about displacement and migration. The artists plan to organize events at major climate conferences, in schools and in arts centers where people can come together to imagine future scenarios through a film screening, opportunities for exchange, a photographic exhibition, fictional documents and workshops. In doing so, they highlight our shared vulnerability in the face of climate change and remind us how essential generosity and inclusion are to our survival.

Lena Dobrowolska and Teo Ormond-Skeaping (Poland and United Kingdom) Born in Lubin, Poland in 1985, and Plymouth, England in 1987, respectively. Live and work in London, England.  The pair joined forces in 2012 and use documentary and photography to reveal the omnipresence of power relationships, environmental racism and political violence in our globalized society by working in partnership with researchers, NGOs, policymakers and international institutions in areas severely affected by climate change. Winners of the 2016 Culture and Climate Change: Future Scenarios residency, Dobrowolska and Ormond- Skeaping’s work has been exhibited worldwide, including most recently at the Noorderlicht International Photography Festival (2019), Ci.CLO Bienal Fotografia do Porto (2019), Kunst Haus Wien (2019), Unseen Amsterdam (2018), Fotofestiwal, Lodz (2018), Photomonth, Krakow (2016), Festival Fotograf, Prague (2014), and The Grey House Foundation, Krakow (2016).

FLATFORM (Italy), That which is to come is just a promise

Lena Dobrowolska and Teo Ormond-Skeaping (Poland/United Kingdom), You never know, one day you too may become a refugee

Since 2009, an estimated one person per second is displaced following sudden-onset disasters. Disasters such as droughts, floods, earthquakes and tsunamis have left many victims without shelter, clean water and other basic necessities. Meanwhile, slow-onset events, such as desertification and sea level rise, also force people out of their homes. Environmental issues are often intrinsically linked to the same political, economic and social factors that cause displacement. A World Bank report released in March 2018 indicates that 143 million people around the world could be displaced by 2050 as a result of these impacts if nothing is done to halt climate change. Significant progress has, nonetheless, been made in recent years to address the gap in international law to improve protection for people who are displaced across borders because of disasters and climate change. Tackling the enormous challenge we face begins by making it visible. This special edition of the COAL Prize therefore honors artists from around the world who are bearing witness, imagining, experimenting and working to create a world that pays more attention to ecological balance and climate justice. Through their creations, they can encourage policymakers to understand and act on the reality of displacement caused by climate change.

Awarded on the occasion of the COP25 in Madrid, in association with the Platform on Disaster Displacement and the cultural programme DISPLACEMENT: Uncertain Journeys, the COAL Prize will be present at the negotiating table to help ensure that political decisions translate into concrete changes for a shared and livable Earth.

Claude d’Anthenaise, Heritage Conservator and Curator and Director of the Museum of Hunting and Nature

Walter Kaelin , Envoy of the Chair of the Platform on Disaster Displacement

François Rivasseau, Ambassador, Permanent Representative of France to the United Nations in Geneva and international organizations in Switzerland

The Partners of the 2019 COAL Prize

For this special edition of the COAL Prize, the laureate will receive a 10,000 euro grant awarded by the François Sommer Foundation. They will also benefit from international visibility

in connection with DISPLACEMENT: Uncertain Journeys.

About the COAL Prize

Created in 2010, the COAL Art and Environment Prize has become a vehicle for identification, promotion and dissemination of artists throughout the world who dare to imagine and experiment, to transform territories, lifestyles, organisations, and production methods. Together, they are building a new collective narrative, a new vision, developing our future heritage, and in doing so creating the necessary optimistic framework for everyone to find the means and the motivation to implement the changes needed for a more sustainable and just world. Each year, the COAL Prize honors ten projects in the field of visual arts relating to environmental issues, which are selected through an international open call. One of the projects will be awarded the Prize by a jury composed of personalities working in the fields of Art and Ecology.

Learn more about our partners the COAL Prize and DISPLACEMENT: Uncertain Journeys