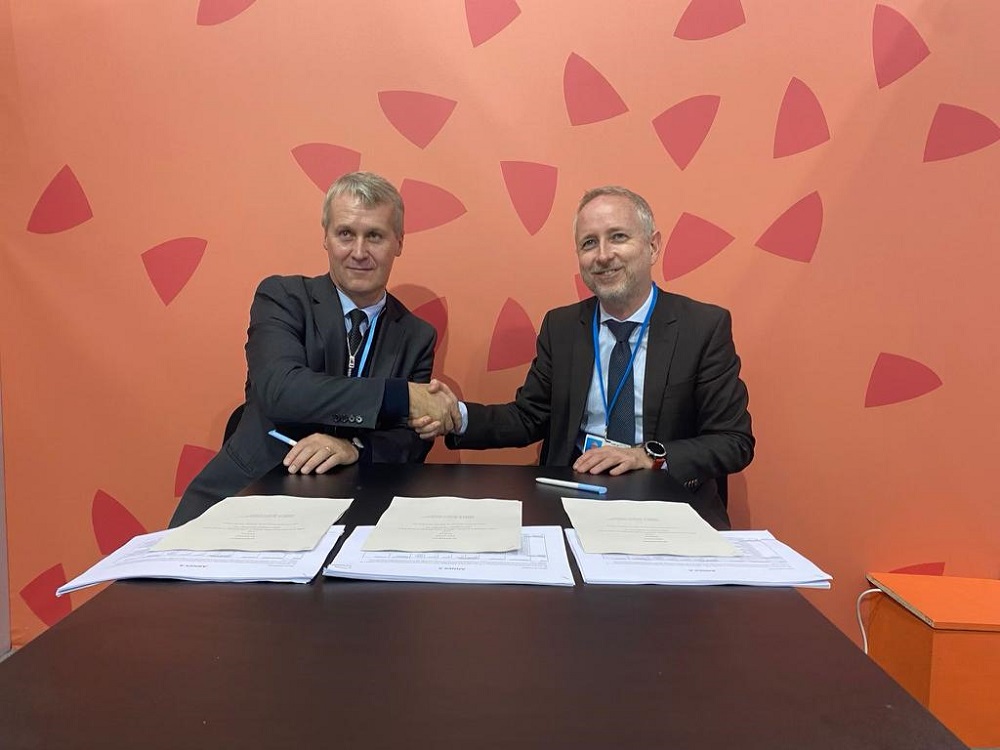 Monday, 8 November 2021 — At the Climate Conference in Glasgow, where States parties are making final negotiated decisions this week, the Norwegian Agency for Development Cooperation (Norad), the Platform on Disaster Displacement (PDD) and the United Nations Office for Project Services (UNOPS) signed an agreement on a joint project to avert, minimize and address displacement related to the adverse effects of climate change.

According to the Internal Displacement Monitoring Centre (IDMC), since 2008 over 318 million people around the world have been forcibly displaced by floods, windstorms, earthquakes or droughts, 30.7 million in 2020 alone.

Large-scale displacements, driven by a number of factors including climate change, have devastating effects on people across the world, particularly on countries and communities most vulnerable to climate change such as small island developing states.

“Climate change is an existential threat for island states. Stronger political will at the international level is needed to combat climate change and ensure the safety and livelihoods of Pacific and other island communities,” said Mr. Anare Leweniqila, Deputy Permanent Representative of Fiji to the UN in Geneva, and Chair of the PDD, in a recent statement.

Looking forward, the World Bank projects that in six regions of the world, rising sea levels, water scarcity and declining crop productivity could compel 216 million people to move within their own countries by 2050, in the absence of immediate action to combat climate change.

“The Intergovernmental Panel on Climate Change has also indicated that risks are increasing in all areas, and so we need to prepare for them, take action to avert and minimize them, and understand them better,” stated Mr. Atle Solberg, Head of the Secretariat of the PDD, at the signing event.

Norad and the PDD are embarking on a 3-year project which aims to develop a better understanding of displacement in the context of climate change as loss and damage, and to enhance action and support for measures aimed at averting, minimizing and addressing displacement related to the adverse effects of climate change.

The overall project is situated within the implementation of the United Nations Framework Convention on Climate Change (UNFCCC) and the 2015 Paris Agreement, but will adopt an integrative approach, operating across related policy areas such as disaster risk reduction, human mobility, humanitarian assistance and protection, human rights, and development. The project will be implemented in up to five developing countries particularly vulnerable to the adverse effects of climate change, including small island developing states and least developed countries.

“Loss and damage is a very realistic scenario in some areas of the world, and will become more and more critical in the coming years,” declared Mr. Bård Vegar Solhjell, Director General of Norad, at the COP26 Nordic Pavilion event.

The needs and types of action and support within each country will be identified and developed during an inception period of six months, during which consultations, country needs assessments, priority-setting and development of country-specific National Project Plans will be undertaken. During the inception period, the project will also consult with mechanisms for collaboration and coordination within the UNFCCC such as the Least Developed Countries Expert Group, as well as Party groupings such as the African Group, the Alliance of Small Island States, and the Independent Association of Latin America and the Caribbean (Asociación Independiente de Latinoamérica y el Caribe).

The project will be supported by a number of Operational Partners, including: Climate Action Network, the Internal Displacement Monitoring Centre, the International Centre for Climate Change and Development, the International Federation of Red Cross and Red Crescent Societies, the International Organization for Migration, the Norwegian Refugee Council, the Office of the United Nations High Commissioner for Refugees, the UNFCCC Secretariat, the art project DISPLACEMENT: Uncertain Journeys and the two artists Ms. Lena Dobrowolska and Mr. Teo Ormond-Skeaping.

About the Platform on Disaster Displacement (PDD): PDD is a group of States leading and working together with partners towards better protection for people displaced across borders in the context of disasters and climate change. Its Secretariat is hosted by UNOPS in Geneva, Switzerland.

1-4 November 2021, Jamaica -  At the occasion of the VII Regional Platform on Disaster…

COP26 Hybrid Event | From Science to Policy and Action: Human Mobility in Times of Climate Change