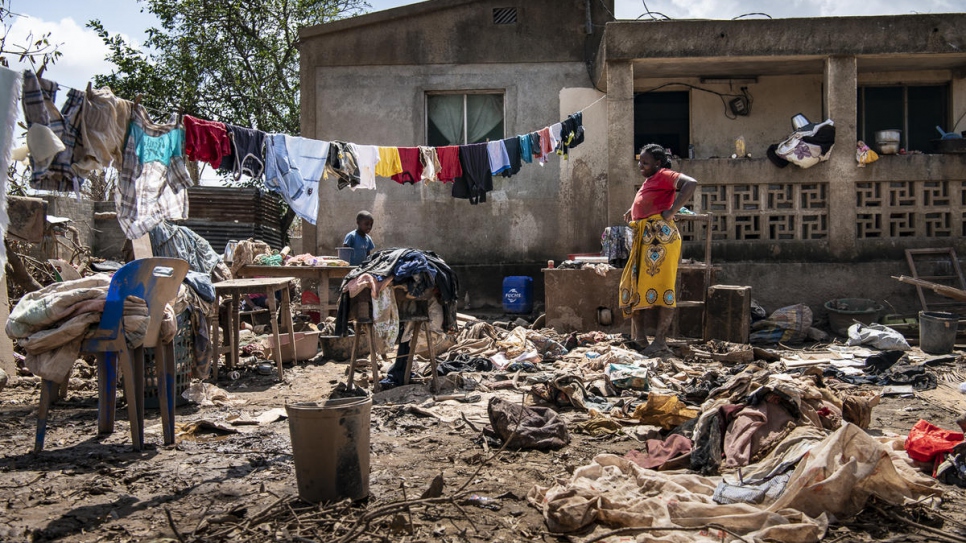 Along a main road in Buzi, Mozambique, fallen mango trees, that once stretched high in to the sky, litter the sidewalks. Buildings have been reduced to rubble, while many of those still standing no longer have roofs or windows. The front end of a car lies wrecked outside what used to be a food shop, its back end washed away by floodwaters.

Looking out from the barred window with sadness in his eyes, Jacob, 64, the shop’s owner is still struggling to take it all in.

“All my stocks are destroyed.” he says. “The rice, the pasta, everything, I don’t know how I will survive now.”

For miles around, towns and villages have been left in ruins after Cyclone Idai caused the River Buzi to burst its banks, leading to unprecedented flooding. Residents are returning, only to find there is little left of their homes and possessions.

“All my stocks are destroyed. The rice, the pasta, everything, I don’t know how I will survive now.”

Schools are closed until further notice. Hospitals and health clinics are barely functional. Electricity wires lie in the mud, next to discarded flip flops and plastic waste.

“You just see a dark city, like a dark township,” says Antonio, the owner of the local supermarket. “I wonder what’s next. We need help now.”

When the cyclone churned ashore on the night of March 14-15, Antonio and his wife frantically tried to keep the roof of their family home intact as hurricane-force winds tore off tile after tile.

“It was unbelievable,” says Chillo, Antonio’s nephew. “I saw things flying through the air – things I never thought could be lifted, spinning sheets of roofing metal, twisted tree limbs and household items of all sizes.” Manuel, Antonio’s neighbour was not so lucky. A wooden doorframe is all that remains of his house. When the floodwaters rose, they melted away the mudbricks. His family were forced to shelter on the roof of a nearby bar for seven days before they were able to return.

Nearly three weeks after Idai’s rampage, Buzi remains cut off from the nearest major town, Beira, as the roads have either been washed away or are covered in debris. Helicopters fly in life-saving aid, but they can only carry so much, and the needs vastly outstrip what humanitarian organizations are able to deliver.

Meanwhile, amid widespread shortages, the price of food has rocketed. It will be some time before commercial supply chains can be restored and shops can properly restock. Rice now sells in Buzi for up to five times as much as it did just three weeks ago. The cyclone hit at the end of the growing season, destroying some 711,000 hectares of crops and leaving farmers with no money to buy new seeds. There is now a real risk of famine in a country that already had one of the world’s worst rates of child malnutrition.

“What we need now is food,” says Antonio. “We don’t have food here. My kids go climbing up and down trees looking for coconuts. But that’s not enough. I received a half cup of beans, but I have many family here. They all look at me and say ‘do something.’ It’s very hard you know, it’s like I’m failing to be a good father.”

“Many people are getting sick here. There is no water for us to drink.”

With wells supplying drinking water soiled and latrines filled with mud, a cholera outbreak is presenting a fresh threat in cyclone-stricken areas. Already, more than 1,000 people have been diagnosed with the potentially-fatal disease, according to government reports. Oral vaccines have been flown in to the country but until they are administered, some are left with little choice but to consume contaminated food and water.

“Many people are getting sick here,” says Antonio. “There is no water for us to drink. I wonder what’s next for us because this water comes with different diseases. By consuming this kind of water, people are vomiting, they are having a problem with their stomach. It’s no joke the things that are happening here.”

People are anxious for what the future holds. Some have decided to leave Buzi, fearful that this will not be the last time the town sees extreme weather. In total, around 150,000 people are living in displacement sites in Mozambique, either unwilling or unable to return home.

“Every year it’s getting worse,” says Vito, a primary school teacher. “Every year it gets hotter and wetter. There’s nothing left in Buzi. I can’t bring up a family here.”

The European Forum for Disaster Risk Reduction took place from 24-26 November. Under the title…