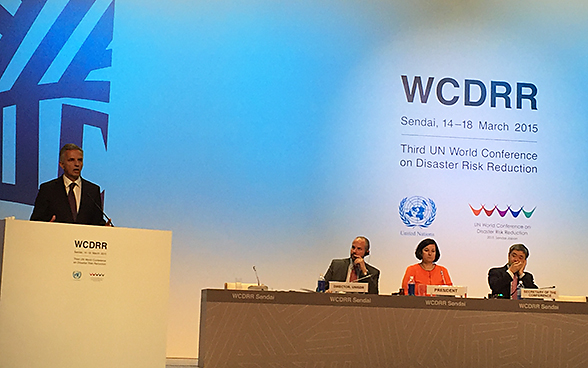 Bern, 14.03.2015 – More and more people are threatened by disasters. To reduce the risk, precautionary measures must be taken early on. This message was underlined by Federal Councillor and head of the Federal Department of Foreign Affairs (FDFA) Didier Burkhalter in his speech at the Third UN World Conference on Disaster Risk Reduction in the Japanese city of Sendai.

Disasters do not respect national borders, can affect entire societies and economies and pose a threat to sustainable development. “We are currently seeing a big increase in the number of people forced to leave their homes due to conflicts and the effects of climate change,” said Mr Burkhalter in his speech at the Third UN World Conference on Disaster Risk Reduction, in which he presented the Swiss position on a new international strategy for disaster risk reduction. The aim of the conference in Sendai, Japan, is to adopt a new framework programme setting out the focal points and priority areas for disaster risk reduction in the years ahead. The framework will replace the existing strategy framework dating from 2005. In his speech, Mr Burkhalter emphasised that responding to disasters is no longer enough and that preventive measures are needed to ensure better disaster preparedness. This requires political will, social commitment and economic instruments and innovations. “Disaster risk reduction measures are essential to ensure that what is achieved through development can be safeguarded for future generations,” said Mr Burkhalter, adding that strengthening resilience to disasters remains a priority for Switzerland in its development cooperation. Switzerland is currently supporting projects in many parts of the world in which disaster risk reduction is a key aspect. It is promoting the construction of earthquake-resistant schools in Haiti, Sri Lanka and Myanmar, while in Bolivia and mountainous areas of Pakistan it is assisting local communities with afforestation programmes and measures to combat flooding, for example. The prevention of crises, conflicts and disasters is also one of the priorities of the Dispatch on Switzerland’s International Cooperation in 2013-2016. Switzerland co-initiated the Nansen Initiative in 2012 to ensure better protection for people forced from their homeland by floods, hurricanes, droughts or other natural disasters, and during its chairmanship of the Organization for Security and Co-operation in Europe (OSCE) in 2014, Switzerland made safe management of natural hazards an OSCE priority. Mr Burkhalter announced that disaster risk reduction will also be on the agenda of the OSCE-Asia conference which Switzerland is organising with South Korea in June 2015. In addition, Switzerland wants to see a joining-up of the various international processes in which disaster and natural-hazard reduction plays a role. In his speech in Sendai, for example, Mr Burkhalter underscored Switzerland’s desire to place disaster risk reduction high on the post-2015 sustainable development agenda. The Swiss delegation headed by Mr Burkhalter during his two-day stay in Sendai consists of representatives of the federal government, the scientific community, non-governmental organisations and the private sector. Following Mr Burkhalter’s departure from Sendai, the delegation will be led until the end of the conference on 18 March by Manuel Bessler, the Federal Council Delegate for Humanitarian Aid, together with Benno Bühlmann, Director of the Federal Office for Civil Protection (FOCP), and Josef Hess, Vice Director of the Federal Office for the Environment (FOEN). Before he leaves on 15 March, Mr Burkhalter will lead another event in Sendai on the theme of “risk financing and disaster resilience”. This will discuss how links between the public and private sector can be improved in order to strengthen disaster resilience. Information: FDFA Information, tel. + 41 58 462 31 53 FOEN Information service, tel. + 41 58 462 90 00 FOCP Communication, tel. + 41 58 462 55 83