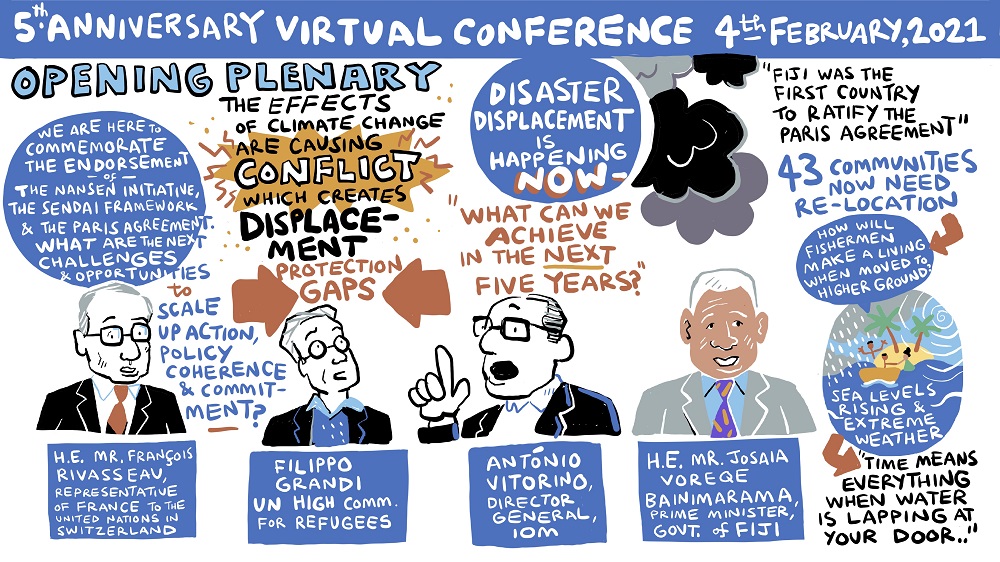 Five years after Sendai, Paris and the endorsement of the Protection Agenda – what has been achieved, what has been overlooked, and what needs to be done to prepare for and protect against displacement in the context of disasters and climate change?

France as the Chair of the PDD 2019-2020 and Fiji as Chair of the PDD 2021-2022 welcomed over 270 participants from across the globe to a virtual commemoration marking the 5th anniversary of the endorsement of the Nansen Initiative Protection Agenda, the adoption of the Sendai Framework for Disaster Risk Reduction 2015-2030 and the Paris Agreement under the United Nations Framework Convention on Climate Change (UNFCCC).

“The most important lessons are learnt by doing, not as individual nations, but as one community committed to tackling this global crisis,” said Josaia Voreqe Bainimarama, Prime Minister, Government of Fiji in a video message during the event opening. “That’s what the Paris Agreement, Sendai Framework, Nansen Initiative and Platform on Disaster Displacement represent.”

Representatives from governments, the UN, international and regional organizations, academia, and civil society gathered at the virtual commemoration. They called for the need to scale-up creative, collaborative and integrated action across the climate change, DRR and human mobility policy areas. Collective action is urgently needed to better protect those at risk of displacement, and those already on the move, in the context of disasters and climate change. The event was co-chaired and organized by France and Fiji with the support of PDD Steering Group members, the Envoy of the Chair of the PDD, the PDD Secretariat, the International Organization for Migration (IOM) and the Office of the United Nations High Commissioner for Refugees (UNHCR).

In a joint press release published the day of the event, UNHCR and IOM, emphasized the strong connections between the three frameworks and the opportunities they present to strengthen and drive collective action. António Vitorino, Director General IOM, stressed the need for the international community “to enhance our collective action, especially ahead of the COP26”. Filippo Grandi, the UN High Commissioner for Refugees called upon States to “invest now in preparedness to mitigate future protection needs,” adding that “waiting for disaster to strike is not an option.”

This urgency and drive to “turn words into action” echoed through the commemoration event, most prominently perhaps in the words, again, of Fiji’s Prime Minister:

“If you have spent the last five years watching communities and livelihoods destroyed by a changing climate, the notion of a more resilient world is still little more than words on paper… Pacific Islanders can tell you first hand: Time means everything when you have water lapping at your door.”

The call for pressing action on climate change, disaster risk reduction and development and resilience resonated throughout the event, reinforced by the heads of several UN agencies:

“Enhanced international cooperation for preventing hazards from becoming disasters will contribute to reduce the numbers of people displaced or otherwise affected by disasters,” stated Mami Mizutori, Special Representative of the UN Secretary-General for Disaster Risk Reduction.

Alongside Petteri Taalas, Secretary-General, World Meteorological Organization (WMO), she called for increased focus on early warning systems and risk reduction measures to ensure long-term support for community resilience and adaption. Together with Director General Vitorino and High Commissioner Grandi, she urged the global community to translate strategies into action to reduce the numbers of people displaced or otherwise affected in the context of disasters and climate change.

The event travelled beyond linguistic boundaries with cartoonist Joshua Knowles capturing the discussion through artworks, illustrated in real time. A creative way of bringing the audience together, he prompted them to think beyond the statements made and questions posed in abstract, visual and occasionally humorous ways.

Three technical panels shed light on each of the three frameworks commemorated at the occasion:

A centerpiece for climate change action ever since its adoption in 2015, the Paris Agreement under the UNFCCC committed States across the world to scale up action to avert, minimize and address the intensifying effects of climate change.

Speakers agreed that the year 2021 and the run-up to the next UN Climate Change Conference of the Parties (COP26) in Glasgow provided a crucial opportunity to formulate more ambitious mitigation and adaptation goals and to include the challenges of human mobility more systematically in national adaptation planning.

In an intervention made by Mark Cassayre, Chargé d’Affaires, U.S. Mission to the United Nations in Geneva, the U.S promised “swift and bold actions to address the climate crisis”. Building on the recent decision made by President Biden to rejoin the Paris Agreement, Mr Cassayre announced renewed efforts to reassert U.S. climate leadership, raise global ambition and increase the resilience of those most vulnerable to the devastating impacts of climate change.

Ambassador Miriam Shearman, the UK’s Deputy Permanent Representative to the UN in Geneva, announced high ambitions as host of COP26 urging all countries to come forward “as soon as possible ahead of COP 26 with ambitious new climate commitments that will help us meet the [Paris] goals.” Panelists added that, from the perspective of Least Developed Countries, the success of COP26 will be determined by concrete agreements, and enhanced commitments, on the question of action and support, including finance for loss and damage.

The Sendai Framework for Disaster Risk Reduction 2015-2030 (Sendai Framework) adopted in 2015 and endorsed by the UN General Assembly marked a major milestone by recognizing displacement as an important way in which disasters affect communities. In identifying displacement as both a major consequence and a driver of disaster risk it encourages States to adopt “policies and programmes addressing disaster-induced human mobility to strengthen the resilience of affected people and that of host communities” (para 30(l)).

The discussion opened with a video looking back at key moments of the Nansen Initiative regional and global consultations held between 2013 and 2015 in Rarotonga, San José, Nairobi, Manila, Khulna and Geneva. Since the endorsement of the Protection Agenda by 109 governmental delegations in 2015, interest in and recognition of disaster displacement as a protection challenge in the international community have increased greatly.

Moderated by the Envoy of the Chair of the PDD, Professor Walter Kaelin, panelists commended the role of the PDD, as a State-led, multi-stakeholder partnership, in bridging the gaps between different policy areas. “It is the way it [the Protection Agenda] has been able to merge together researchers, actors of the civil society and policy makers,” said François Gemenne, Director, Hugo Observatory, “that makes the document really a model for other international instruments that could be designed in the future.”

Panelists called for renewed efforts to disseminate the Protection Agenda globally, beyond policy makers, to practitioners, civil society and front-line responders. The Protection Agenda, recognized as a global and comprehensive yet flexible toolbox, applies in all regions of the world, no matter how challenging and diverse the contexts. Panelists also highlighted the Global Compact for Migration as highly relevant policy instrument to better address disaster displacement, assist and protect disaster displaced persons and promote integrated and coherent approaches.

Engagement of the PDD together with partners addressing displacement risks and protection measures at the regional level also figured prominently during the discussion. For example, the IGAD Free Movement Protocol for the Horn of Africa is the first such protocol to concretely address disaster displacement. The implementation of Guidelines on Admission and Stay in Central America via standard operating procedures and simulation exercises is advancing in the Americas. Another example of regional engagement of the PDD, led by the Internal Displacement Monitoring Centre, is the Pacific Response to Disaster Displacement Project.

“In looking forward, we must reckon with [the] urgent reality that climate change will displace not only communities, but entire nations. This is the reality we can, and we must, prevent,” said Doreen De Brum, Ambassador and Permanent Representative of the Marshall Islands to the United Nations Office in Geneva.

Remembering the Protection Agenda - What is Next?

What is the Paris Agreement?

Read more about the Sendai Framework for Disaster Risk Reduction

Read more about the Paris Agreement under the UNFCCC

The European Union, New Chair of the Platform on Disaster Displacement

GP22 Side Event | Addressing Loss and Damage, Supporting the Most Vulnerable

Together with a large number of partners (please see below for full list), the Platform…