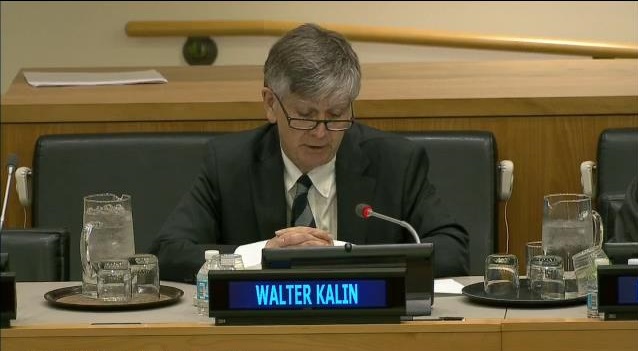 The preparatory process for the Global Compact for safe, orderly and regular Migration has started in May and is led by the Ambassadors of Mexico and Switzerland in New York.

On 22-23 May 2017 in New York, the 2nd informal thematic session for the Global Compact for Migration addressed ‘drivers of migration, including adverse effects of climate change, natural disasters and human-made crisis, through protection and assistance, sustainable development, poverty eradication, conflict prevention and resolution’. The PDD Adviser, Prof. Walter Kaelin, joined one of the three distinguished panels that addressed issues of disaster displacement:

This panel explored ways that i) minimize the adverse effects of environmental degradation, climate change and disasters on migration and ensure effective preparedness and response mechanisms, while harnessing the potential benefits of safe, orderly and regular migration, and ii) link relevant international migration, climate change, environment, humanitarian and development policy frameworks to ensure complementarity and coherence in addressing climate change, hazard-related risks and associated migration pressures at the global, regional and national levels.

Below is the presentation of Prof. Kaelin:

The title of this panel is well chosen: Adverse effects of climate change and “natural” disasters are in fact drivers of migration. Beyond this simple statement, issues are complex. In the following, I build on the outcomes of the Nansen Initiative, a state-led consultative process resulting in a Protection Agenda that was endorsed by more than 100 States in October 2015, as well as the work of the Geneva-based Platform on Disaster Displacement (PDD), the successor to the Nansen Initiative which promotes and facilitates the implementation of the recommendations of the Protection Agenda.

We know that sudden-onset disasters such as windstorms, floods or earthquakes displace an average of about 25 million people per year. As IDMC in a report launched yesterday highlights, this is almost one newly displaced person per second. The large majority of the displaced remain within their own countries as internally displaced persons and many are able to return to their devastated homes after relatively short times. Others seek refuge abroad or migrate to other countries in search of assistance, protection, livelihoods and better opportunities. The overall number is unknown, but there are some well documented cases. In the aftermath of the 2010 earthquake in Haiti, for instance, more than 200’000 Haitians were admitted to or authorized to remain in several countries in the Americas and beyond.

Temporary or circular migration is often used to cope with anticipated or actual negative impacts of slow-onset effects of climate change such as drought, desertification or sea-level rise. This is often an effective response to risks of increased poverty and vulnerability to disasters as remittances or skills acquired abroad help building resilience of families and communities back home. However, such migration is hazardous if it is irregular and migrants become victims of trafficking, economic exploitation and other violations of their human rights. Such migrants are most often invisible and difficult to distinguish from economic migrants.

In countries such as Kiribati, Tuvalu or Bangladesh not only in the long run but already today sea-level rise forces people to permanently move away from areas that become inhabitable as a consequence of more frequent and higher storm surges or simply disappear into the seas due to coastal erosion. Depending on temperature scenarios it is estimated that between 130 million to half a billion people live in areas that will be submerged in the long run.

We also know that disasters are not “natural” but the consequence of a multitude of human factors which are responsible for the vulnerability of the people exposed to a natural hazards. Compare, e.g., the more than 100’000 casualties in the aftermath of the magnitude 7 Haiti earthquake in January 2010 with the 550 people killed in the much stronger earthquake hitting resilient and well prepared Chile a few months later. Obviously, forced and voluntary migration in climate change and disaster contexts are multi-causal.

As just mentioned, people have to move when they are exposed to a natural hazard and are too vulnerable to withstand its impact. Adverse effects of climate change will remain limited if the Paris Agreement is fully implemented. People’s vulnerability is reduced through disaster-risk reduction in accordance with the Sendai Framework, climate change adaptation and resilience-building measures in accordance with the SDGs. If such measures are effective, people can stay. Sometimes, however, it is necessary to move them out of harm’s way by resorting to planned relocation as is done in countries such as Fiji or Vietnam. When despite such efforts, people become internally displaced, effective action to protect and assist and, in particular, help them to rebuild their lives is essential. Evidence indicates that internally displaced persons may decide to migrate abroad in search of better opportunities if they are unable to find durable solutions in their home country.

These are measures addressing drivers of displacement and cross-border migration. In line with the principle of shared responsibility they can be taken in countries of origin, where necessary with the support of the international community. Countries of destination are addressed when climate change- and disaster-affected people cross borders. Here it is helpful to distinguish between effective practices regarding what is often called “migration as adaptation” and cross-border disaster-displacement.

Some countries have created possibilities for temporary or circular migration as a strategy to cope with anticipated or actual risks and impacts of adverse effects of climate change and disasters triggered by natural hazards. This can take several forms including agreements on free movement of persons that are also accessible for climate change- and disaster-affected people. Examples include the ECOWAS agreement that also covers free movement of pastoralists and their animals, or domestic programs such as Australia’s and New Zealand’s seasonal workers programs providing preferential access for persons from particularly affected countries and areas. For small atoll island States permanent cross-border relocation or permanent migration to other countries before they are displaced may become a measure of last resort, providing affected populations with some measure of choice regarding where and when to go. Bilateral or regional agreements in particularly affected regions on how best to prepare and facilitate such movements of persons with respect for their dignity and human rights do not exist yet but, as suggested by Kiribati, might be an effective future practice.

As regards people displaced across borders, international human rights and refugee law fail to adequately protect them with regard to admission and non-return. Nevertheless, a wealth of effective practices that could inform the Global Compact already exist. The Nansen Initiative identified more than 50 States that during the last decades have admitted such persons or refrained from returning them to their country of origin on the basis of domestic law or ad hoc decisions. Sometimes, States use their regular migration laws, as was done, for instance, by Canada, when in 2010 it prioritized pending applications of Haitians for immigration visa. More often, States use humanitarian visa, temporary protection and other exceptional humanitarian protection measures provided for in their migration laws and allpwing for some measure of discretion in their application. This is particularly true for Central and South America countries. The problem with such practices, however, is that they are not harmonized, lack predictability and are sometimes not human rights based. There is also a lack of criteria and processes to determine when such protection may end. In this regard, Central-and Northern American States have recently taken an important a first step by adopting a Guide to Effective Practices for RCM Member Countries on the Protection for Persons Moving across Borders in the Context of Disasters. This is another example that could be followed by other regions and inspire the Global Compact.

Negotiating the Global Compact on Migration provides a unique opportunity to bring together and synthesize principles contained in the Paris Agreement on climate change, the Sendai Framework on Disaster Risk Reduction and the 2030 Agenda for Sustainable Development that are particularly relevant for addressing drivers of migration and to build on domestic law and practices and documents such as the Nansen Initiative Protection Agenda or the MICIC Guidelines to achieve the noble goal of safe, orderly and regular migration for all, including those crossing borders in the context of climate change and disasters.

Watch the full video of the UN General Assembly preparatory process for the intergovernmental conference to adopt a Global Compact for safe, orderly and regular Migration.