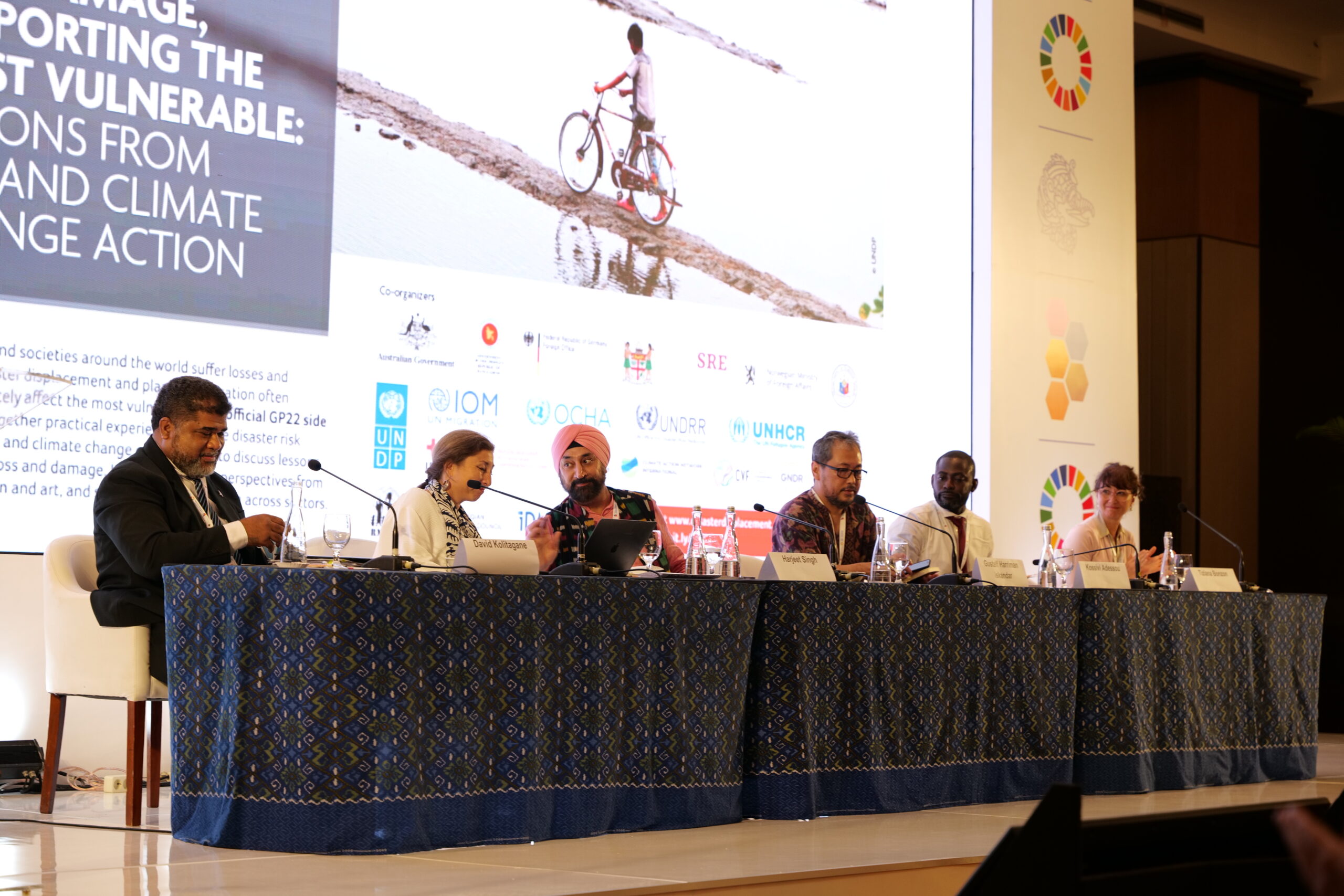 Together with a large number of partners (please see below for full list), the Platform on Disaster Displacement (PDD) organized an official side event at the 2022 Global Platform for Disaster Risk Reduction entitled “Addressing Loss and Damage, supporting the most vulnerable: lessons from DRR and climate change action.”

It was designed with a view to bridging important discussions held at the 2019 Global Platform for Disaster Displacement, the 26th UN Climate Change Conference of the Parties (COP26) and with a view to preparing for the Sendai Midterm Review and COP27.

Disaster Displacement is increasingly recognized as a form of loss and damage and while realities around the world show that limits to adaptation have been reached and many vulnerable communities experience loss and damage, including displacement and planned relocation, already, the disaster risk reduction (DRR), climate change and humanitarian/development communities still grapple with a coherent response to the complex challenges associated with it. 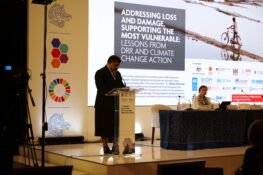 Fiji’s Permanent Secretary Kolitagane highlighted the unprecedented levels of displacement occurring in Small Island Developing States in the Pacific in the context of climate change and disaster impacts. Recognizing the complexity of the challenge relating to loss of social and cultural ties and identities, he described how the Fijian government is trying to address some of these impacts on the most vulnerable communities through its Disaster Displacement and Planned Relocation Guidelines. Six communities have already been moved out of harm’s way and onto safer ground while currently fourty communities await their relocation – a massive endeavor for which Fiji seeks international support. As the current Chair of the PDD, about to hand over to the EU on 1 July 2022, Fiji looks very much forward to continuing the discussions on Loss and Damage at the COP27 and relevant UNFCCC processes.

Mr. Nassef (UNFCCC) centered his welcome remarks around the necessary mindset shift needed to recognize and address climate change as an existential threat. He outlined how discussions have moved on over the last decades understanding it as an environmental, then developmental, and now existential threat the international community must find responses for. He described the significant workstream on Loss and Damage set up under the auspices of the UNFCCC, comprising the Warsaw National Mechanism including its Task Force on Displacement and more recently the Santiago Network on Loss and Damage, currently being operationalized in line with the Glasgow Dialogue of COP26. Where the existence of entire States and their territory is threatened, it is high time for the international community to come up with solutions including international law and provisions for relocations that also grapple with non-economic losses regarding culture and species loss.

The Director of the Red Cross Red Crescent Climate Centre, Dr. Maarten van Aalst, joined the panel through a recorded video message presenting the latest findings from the IPCC 6th assessment report which he had co-authored. He stressed that scientific evidence now exists that climate change is no longer an issue of the future and that adaptation has reached its limits, with between 3.3-3.6 billion people already living in climate hotspots today and facing loss and damage due to climate impacts.

A combination of hazards and vulnerability, compounded by poverty, unsustainable use of resources and urbanization leads to humanitarian crises in an increasingly complex and cascading risk landscape around the world. While measures are taken to adapt, adaptation is not happening fast enough and will not be able to prevent loss and damage. The global financial flows have not been successfully directed at supporting adaptation or are geared to addressing loss and damage, hence the impact continues to be borne by the most vulnerable regions and the most vulnerable countries in these regions, including displaced persons.

After these welcome remarks, the session moved on to presentations by panelists representing art, academia and activism, sharing experiences from DRR and Climate Change Action from different regions of the world. 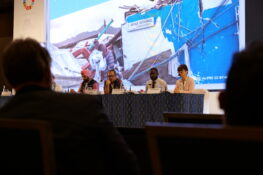 Ms. Tiziana Bonzon, Manager for Climate, Migration and Resilience at International Federation of Red Cross and Red Crescent Societies, described the climate crisis as a humanitarian crisis. With an increase in frequency and intensity of climate related disasters, many more people are expected to move within their own countries over the coming years. National Red Cross Red Crescent Societies work around the world on interventions to reduce risk and help communities to adapt, including by planned relocation. She sees potential in innovative approaches such as forecast based financing and anticipatory action to supporting exposed and vulnerable communities.

Mr. Adessou Kossivi, Acting Regional Lead of Africa at Global Network of Civil Society Organisations for Disaster Reduction, highlighted some of the UNFCCC mechanisms that have been established to address Loss and Damage and connected them to the realities on the ground in West Africa where the impacts of climate change and loss and damage affect communities also in non-economic and indirect ways. In Niger, drought, floods and other hazards force people to move from scarce pastures to other places, leading to conflict and repeated displacement. Communities struggle with the provision of social services to displaced persons. He called for greater international solidarity and hopes the Glasgow Dialogue will succeed in raising the necessary funding from States to finally address Loss and Damage rather than continue the path of increasing greenhouse gas emissions.

Two Indonesian artists were also invited to this side event. Mr Yopi Andri performed a traditional storytelling performance at the beginning of the session – a so called ‘nandong’ performance entitled ‘Smong’ has served as an evacuation call in the wake of tsunamis and saved many lives in the big disaster of 2004.

Mr. Gustaff Harriman Iskandar, Director of  the Indonesian non-profit platform ‘Common Room‘, explained how the knowledge of local and indigenous communities needs to be used and combined with science and technology to cope with changing weather patterns and extreme conditions to ensure people’s resilience and avoid displacement from happening. He used the example of a local farming calendar that allowed Indonesian communities to organize their harvest in line with microclimate condition analysis and hydrology, supported by traditional storytelling, even in years with extreme weather events. He warned against the loss of local stories, traditions and culture – collective memories and knowledge will be an important way to learn from the past and thrive in the future.

Mr. Harjeet Singh, Senior Advisor at Climate Action Network, argued for the need to bridge the climate action discussions with the DRR and also humanitarian communities. Climate impacts and Loss and Damage are already felt at the community level and it is important to work across the whole spectrum and identify the community needs, move away from the silo-ed approach that is upheld by geopolitics and donor preferences. 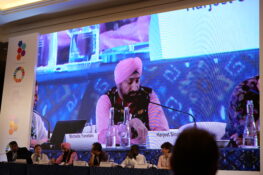 In times where 90% of disasters are climate related, humanitarian actors need to be better prepared to respond also to slow-onset disasters and their devastating impacts on communities. He argued for a human rights and climate justice based approach recognizing the obligation of those contributing to the climate crisis to also bear the costs of it and channel financial support to those in need. At the end of the day, protection and solutions will be provided by communities so it is imperative to find ways through the global and national tools available to provide communities with the resources to implement those.

Ambassador Ken O’Flaherty from the UK and Norwegian Ambassador to Indonesia Rut Giverin took the floor and participants asked questions on human rights, insurance solutions, bridging and integrating climate change, DRR and humanitarian action, among others. There was a call to continuing this conversation in policy spaces such as other events at GP22, the Sendai Framework Midterm Review and COP27.

In a final round, panelists formulated their main asks for the road ahead – to bring together the climate change and DRR discussions also with human mobility debates and processes (such as the IMRF), to enhance global solidarity and listen to local voices, to invest in Early Warning Systems, to make polluters pay for addressing Loss and Damage in a human rights based way and to involve communities, cultural actors and artists in the participatory processes needed to avert, minimize and address Loss and Damage and disaster displacement.

It was livestreamed and is available as a recording.

Find out more about