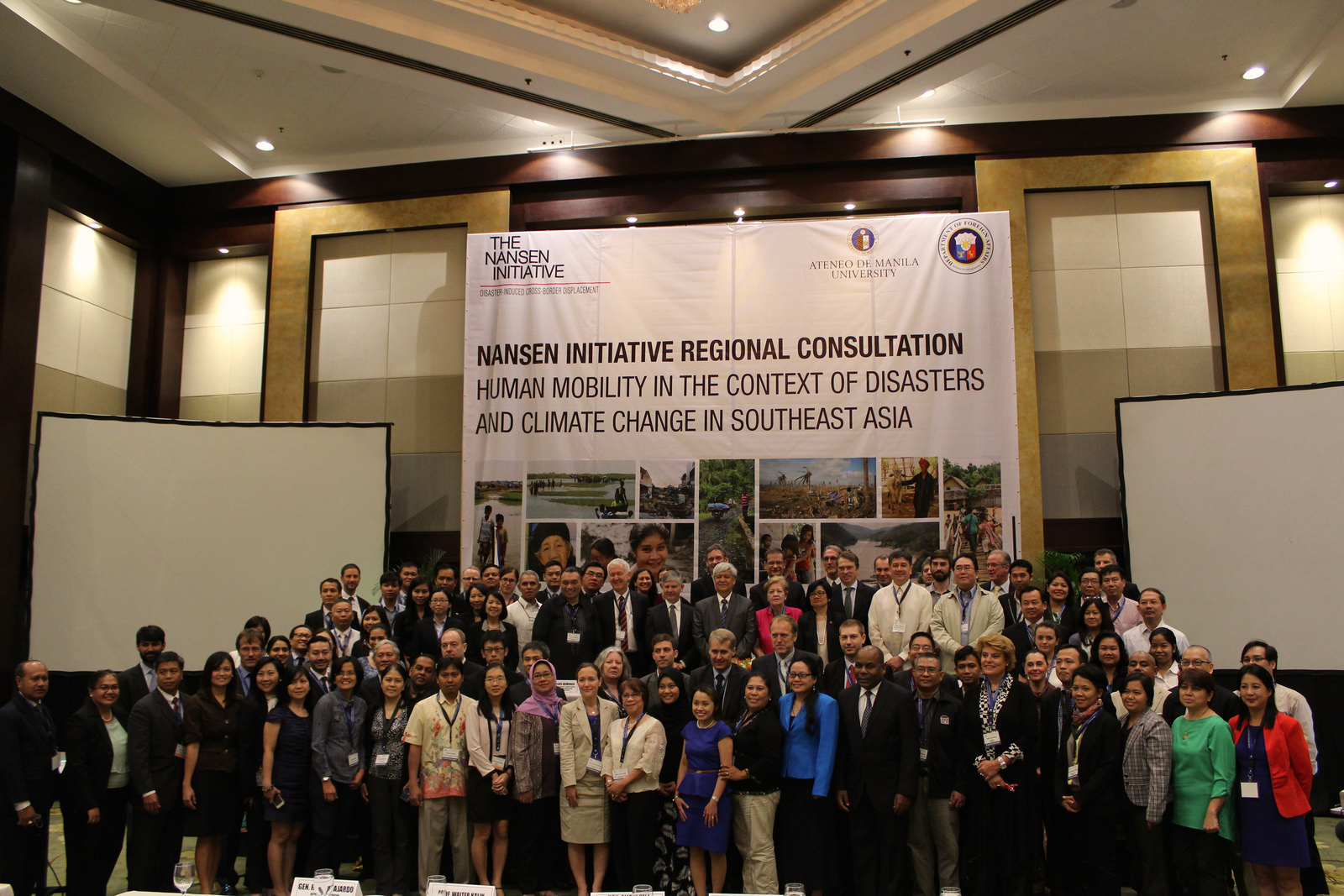 Manila, Philippines, 15 October 2014 – Philippines hosts Global Conferences on disasters and displacement Manila, Philippines, 15 October 2014 – This week, the Philippines plays host to two key global conferences on disasters response and displacement challenges, the Disaster Response Dialogue (DRD) and the Nansen Initiative (NI), coming near the one-year anniversary of Super Typhoon Haiyan / Yolanda. The DRD is a “platform bringing together governments and humanitarian organizations involved in international disaster response to improve trust and mutual cooperation” while the NI is a consultative process for “a global protection agenda for people displaced across borders in the context of natural disasters and the effects of climate change.” The two processes were launched in Geneva, Switzerland in 2011 and 2012, respectively, with staunch support of the Philippine Government. “Our hosting of these two events demonstrates the Philippines’ strong commitment to contribute to cutting-edge global discussions on dealing with disasters and human mobility crises. The DFA, through the Philippine Permanent Mission to the UN in Geneva, takes pride in having played an important role in the birth and development of the DRD and NI,” said Assistant Secretary Jesus R.S. Domingo of the Department of Foreign Affairs Office of the United Nations and International Organizations (UNIO). The events also are being held in the Philippines in light of the challenge raised by H.E. President Benigno S. Aquino III when he asked the international community “what more can be done?” in terms of relevant global action, during his address before the Climate Change Summit held last month at the United Nations in New Yorrk. Disaster Response Dialogue From 13 to 14 October 2014, the Philippine Government, in partnership with the Governments of Switzerland and Australia, the UN Office for the Coordination of Humanitarian Affairs (OCHA), the International Federation of Red Cross and Red Crescent Societies (IFRC), and the International Council of Voluntary Agencies (ICVA), held the Second Global Conference on the DRD on the theme “Improving Trust and Cooperation for more effective Humanitarian Responses” at the Diamond Hotel in Manila. More than 80 representatives from governments, humanitarian actors as well as representatives from regional institutions, military, the private sector and academia from around the world gathered to identify practical recommendations in improving trust and mutual cooperation as well as enhancing international disaster response among actors. “Trust and cooperation do not easily happen during an emergency situation. The working relationship starts from the pre-disaster work which requires meetings and getting to know each other and the systems of each organization,” said Department of Social Welfare and Development Secretary Dinky Soliman. “One lesson I have gained from Haiyan is that while experiences and expertise can help, it will only be effective if it is practiced with proper understanding, proper grasp of the context of the place. And so, the surge of compassion and desire to help expressed by foreign agencies must be balanced with an understanding of the situation and capacities of the country they will support,” she added. Drawing on the experience of Typhoon Yolanda, participants called for a realignment of the international humanitarian system to be more supportive of national-level leadership of disaster response operations. “International responders need to do more to accommodate themselves to domestic approaches rather than the other way round,” noted Charles-Antoine Hofmann, Executive Coordinator of the DRD, “And national governments can do more to make themselves ready to take the lead of a major operation.” Recommendations from the conference included measures to create more transparency in international humanitarian finance, the development of clear national rules and procedures for managing outside humanitarian response assistance, and ways to enhance the building trust and confidence between foreign and local responders. “We believe that these recommendations can and should be implemented. Our role is to bring these recommendations home to our decision-makers and deliberate on how we can turn them into concrete actions,” Assistant Secretary Domingo remarked. Nansen Initiative The NI Regional Consultation for Southeast Asia opens today in Manila with the theme “Human Mobility in the Context of Disasters and Climate Change.” Hosted by the Philippine Government in partnership with the NI’s founders, the Governments of Switzerland and Norway, and the Ateneo School of Government, with funding support from Germany and the European Union, the three-day event draws participation from states, international organizations, non-governmental organizations (NGOs), civil society, and academic institutions from source and destination countries of migration and displacement. Regional participants include representatives from ASEAN member-states and Timor Leste. “In the Philippines, Typhoon Yolanda forced more than four million people out of their homes. A million more than in Africa, the Americas, Europe and Oceania all combined.  In the Southeast Asia region, 24 million people were displaced over the last five years,” declared Professor Walter Kaelin, Envoy of the Chairmanship of the NI. “Southeast Asia is one of the world’s most vulnerable regions to natural hazards. Such disasters, including typhoons, earthquakes, tsunamis, volcanos, floods, droughts and landslides, often trigger displacement, primarily within national borders but also abroad. Governments, civil society, international and national organizations, and communities have to prepare,” he emphasized. Better understanding the underlying causes of human mobility in such contexts, and working with states and partners on policy and programmatic outcomes will be the core objectives of this consultation. Other regional consultations and civil society meetings have already concluded in the Pacific, Central America, the Horn of Africa and will soon be held in South Asia to enrich the NI process. The results of these consultations will be consolidated and discussed at a global consultation in 2015. The Office of the UN High Commissioner on Refugees (UNHCR) and the International Organization on Migration (IOM) also provide key support to the NI. The two events hosted by the Philippines demonstrate the country’s resolve to contribute meaningfully to global discussions on dealing with disasters and displacement, particularly in the context of international cooperation in the aftermath of Super Typhoon Yolanda, and in light of the country’s international leadership in the DRR, human mobility and climate change agendas. END For more information, please contact: