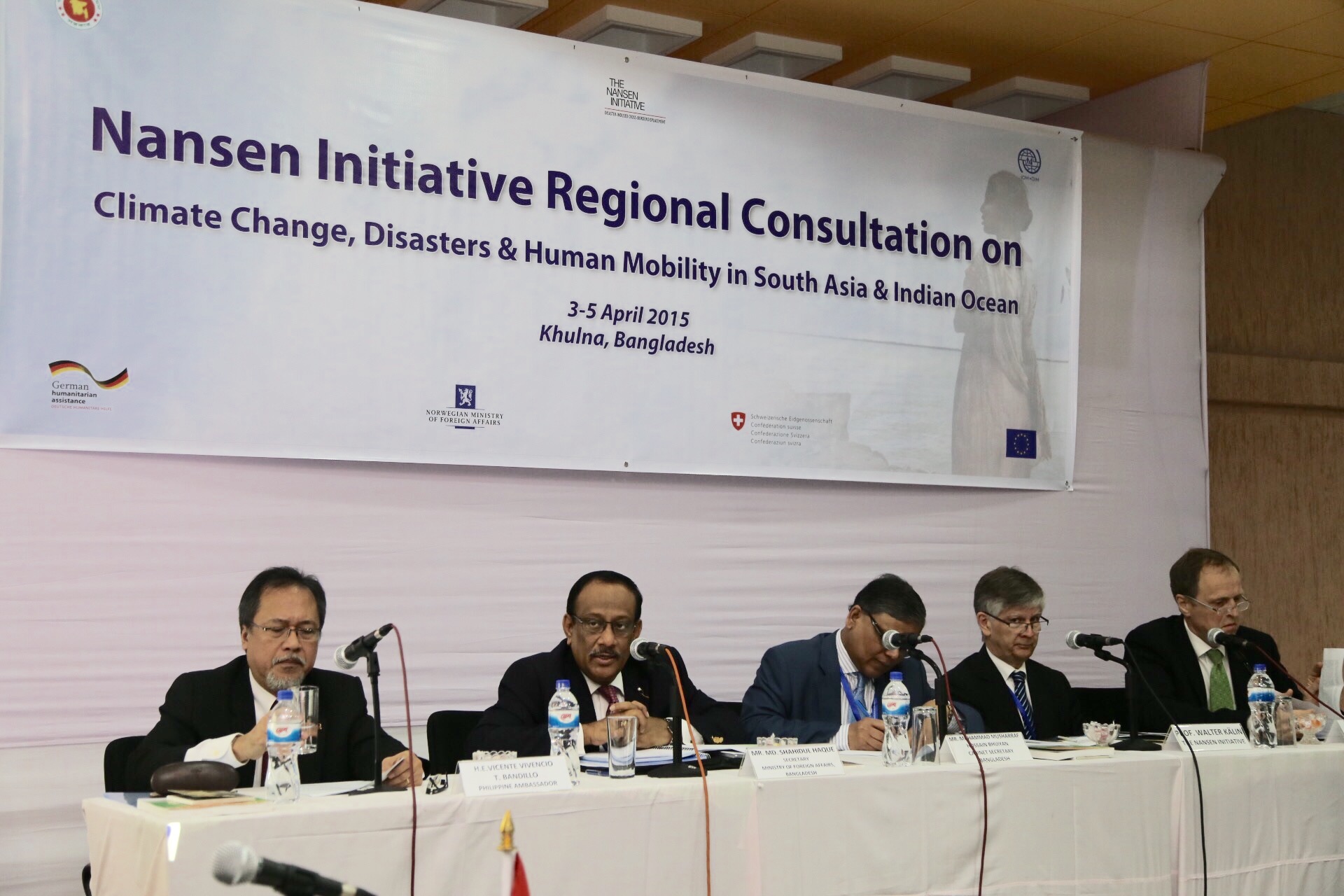 FOR IMMEDIATE RELEASE Preparing for the increasing challenges of climate change on population movements Khulna, Bangladesh, 5 April 2015 During the Nansen Initiative Regional Consultation held in Khulna, Bangladesh on 3-5 April 2015, participants recognised the displacement and migration of South Asian and Indian Ocean communities due to natural hazards and stressed the need for prevention, preparedness and responses for such communities at the community, sub national, national, regional and international levels. Since 2008, every year an average of 27 million people globally were forced to leave their homes as a result of disaster, such as flood, windstorms, earthquake, or drought. The people who are compelled to move are particularly vulnerable and need special protection and assistance. “With natural disasters critically limiting livelihoods, farmers feel the immediate effects of climate change.  These people hardly have any option than relocating from their parental land when their life is on the margin. If we do consider relocation, we also need to think how practical and realistic it is for people to move and integrate in new settings from climate and disaster stressed areas”, emphasized Mr. Md. Abul Kalam Azad, Principal Secretary to the Hon. Prime Minister of Bangladesh. “Between 2008 and 2013, 46 million people were displaced by disasters in South Asia alone. In a densely populated region with 1.7 billion people, a single event can have massive consequences and trigger large-scale population movements. Displacement can have devastating effects on people’s lives. There is no solution that fits all.  It is therefore crucial to find solutions that are adapted to specific contexts, specific needs of vulnerable people, and solutions that will concretely help affected communities”, insisted Prof. Walter Kaelin, Envoy of the Chairmanship of the Swiss/Norwegian-led Nansen Initiative. Expressing the commitment of the Bangladesh Government to the cause, who is also in the Steering Committee of the Nansen Initiative, the Foreign Secretary Mr. Shahidul Haque mentioned that Bangladesh continues to learn from experiences and strategies from other countries that can be adapted locally. “I believe that we may need to find out what is within our capacity of adaptation, and also what is not. If forced ‘human mobility-displacement’ is not adaptable, then we should think of ways in which we can uphold the displaced peoples’ right to survive. This is surely within their evergreen ‘right to development’. It is in that context, as much as we see within Bangladesh and elsewhere, we would need to look at the displaced persons’ ‘choice’ and ‘ability’ to move elsewhere”, said Mr. Muhammad Musharraf Hossain Bhuiyan, Cabinet Secretary, Government of Bangladesh in his remarks. The Regional Consultation, entitled ’Climate Change, Disasters and Human Mobility in South Asia and the Indian Ocean’ brought together more than 90 participants representing Governments of ten countries from South Asia and the Indian Ocean region, including Afghanistan, Bangladesh, Bhutan, Madagascar, Maldives, Mauritius, Nepal, Oman, Pakistan, and Sri Lanka; as well as representatives from regional and international organizations, UN Agencies, civil society organizations and research institutions. It was hosted by the Government of Bangladesh and jointly organized by the Nansen Initiative and the International Organization for Migration (IOM). On the second day, participants were invited to visit and interact first hand with a community in the district of Khulna, directly affected by Cyclone Aila in 2009 and still enduring the impact in their daily lives. Aila was one of the most devastating cyclones that hit Bangladesh. It caused widespread damage and forced 75 000 families to leave their home. “Whether we go for climate change adaptation or disaster preparedness, we must do something urgently through the wider development lense for the displaced people such as we visited in Dacope”, said Bangladesh Foreign Secretary Mr. Md. Shahidul Haque. “It is very upsetting that six years after Cyclone Aila, people in this community are still living in sub-human conditions. It is the responsibility of governments, civil society and international community to take concrete steps to immediately improve their quality of life and also prioritize long term plans “, emphasized Mr. Sarat Dash, Chief of Mission of the International Organization for Migration (IOM). On the third and concluding day, a Summary of Conclusions was agreed by the participants. In the Summary the participants recognised that South Asia and Indian Ocean is exposed to a wide range of natural hazards that has a potential to trigger human mobility and have indeed resulted in significant displacement. Participants recognised the importance of national and regional disaster risk reduction and climate change adaptation strategies. They acknowledged that if managed properly migration can be a positive climate change adaptation measure. Participants provided specific set of recommendations in 5 areas – disaster risk reduction and climate change adaptation, protection of displaced persons in the context of disasters and the adverse effects of climate change, migration as adaptation, planned relocation and data collection and scientific knowledge. The participants also recommended that the Nansen Initiative consultation process should also be linked to the UN as well as all other major global discourse and framework on climate change. This Regional Consultation feeds into the Nansen Initiative’s bottom-up approach to better understand human mobility dynamics linked to climate change and disasters in South Asia and to identify how countries and communities adapt to climate change, and prepare and respond when a disaster strikes. “As soon as this Consultation closes today, the Nansen Initiative will enter its next crucial phase, which consists in finalizing the Protection Agenda. This document will provide good practices and innovative ideas on how to improve the protection of people forced to flee abroad following a disaster”, concluded Swiss Ambassador Christian Fotsch in his closing remarks. For more information on the Nansen Initiative: disasterdisplacement.org For more information on the Khulna consultation: Ministry of Foreign Affairs, Government of Bangladesh Nansen Initiative –  Chirine El-Labbane,  Communication Officer,  +41 79 120 1178, disasterdisplacement.org

Hybrid Side Event - Addressing Loss and Damage, Supporting the Most Vulnerable: Lessons from Disaster…

1-4 November 2021, Jamaica -  At the occasion of the VII Regional Platform on Disaster…