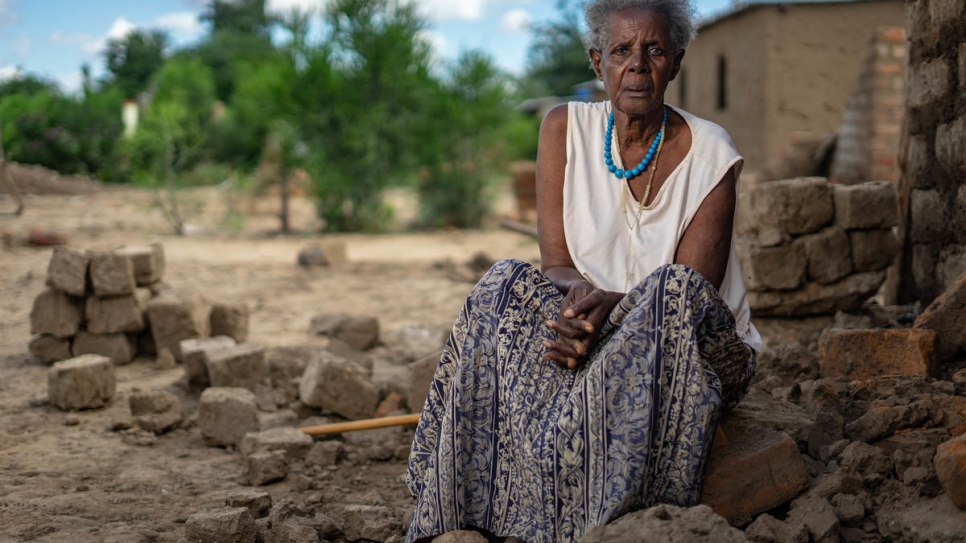 UNHCR, the UN Refugee Agency, is working to dispatch emergency relief items – including tents, tarpaulins, solar lanterns, cooking utensils and other items – to help refugees who lost their homes in parts of Zimbabwe devastated by Cyclone Idai.

The cyclone affected tens of thousands of people when it struck the eastern coast of Southern Africa during the night of 14–15 March, causing torrential rain and flooding in parts of Zimbabwe, Mozambique and Malawi.

The refugee agency is working with the governments of the affected countries and other humanitarian partners to assist those in need. These include refugees in Tongogara, Zimbabwe, and the communities hosting them.

One survivor is Deborah Kibangu, 44, who fled to Tongogara to escape conflict in the Democratic Republic of the Congo.

“My children don’t even have a single pair of shoes. Everything was washed away by the rains.”

She had built a two-room house for herself and her two children. On Saturday, she stood next to its destroyed walls and surveyed the damage.

“My children don’t even have a single pair of shoes,” she said. “Everything was washed away by the rains.” “Before the cyclone, my life was hard. Now it’s just gotten worse,” she added. Deborah is one of some 13,000 refugees at Tongogara camp. They and 20,000 residents who live nearby need urgent assistance.

More than 100 people are reported to have died due to the cyclone in Zimbabwe and the government has declared a state of disaster. In Chipinge district, where Tongogara camp is located, over 2,000 refugee houses, mostly built with mud bricks, were completely or partially damaged and over 600 latrines have collapsed.

UNHCR staff on the ground have conducted a rapid assessment to determine the extent of the damage and concluded that there is a danger of waterborne diseases as borehole water is feared to be contaminated by flood waters.

“We have compiled emergency shelter and core relief items from our global stock which will be flown into the affected areas immediately,” explained Valentin Tapsoba, UNHCR’s Regional Director for Southern Africa.

“We are planning to distribute these critical items to some 30,000 people in dire need,” added Tapsoba. The assistance will come as a huge relief, not least for elderly refugee Magdalena Niragire, who sits among the rubble of her demolished house. The 97-year-old Rwandan lost nearly everything when the cyclone struck.

“We are planning to distribute these critical items to some 30,000 people in dire need.”

“My life is not good. I’m always sick and now I’ve lost all my property in the rain,” she said.

She is lucky to have her family with her and they are trying to rebuild her house.

“By responding to this situation and by using our expertise, we continue to demonstrate solidarity with the people of this region,” says Tapsoba. “For decades, they have hosted refugees and shared their limited resources with them.”

UNHCR will continue to support the effort to respond to the urgent needs of the affected, including refugees and their host communities.

Zimbabwe’s displaced struggle in the aftermath of Cyclone Idai

The European Forum for Disaster Risk Reduction took place from 24-26 November. Under the title…