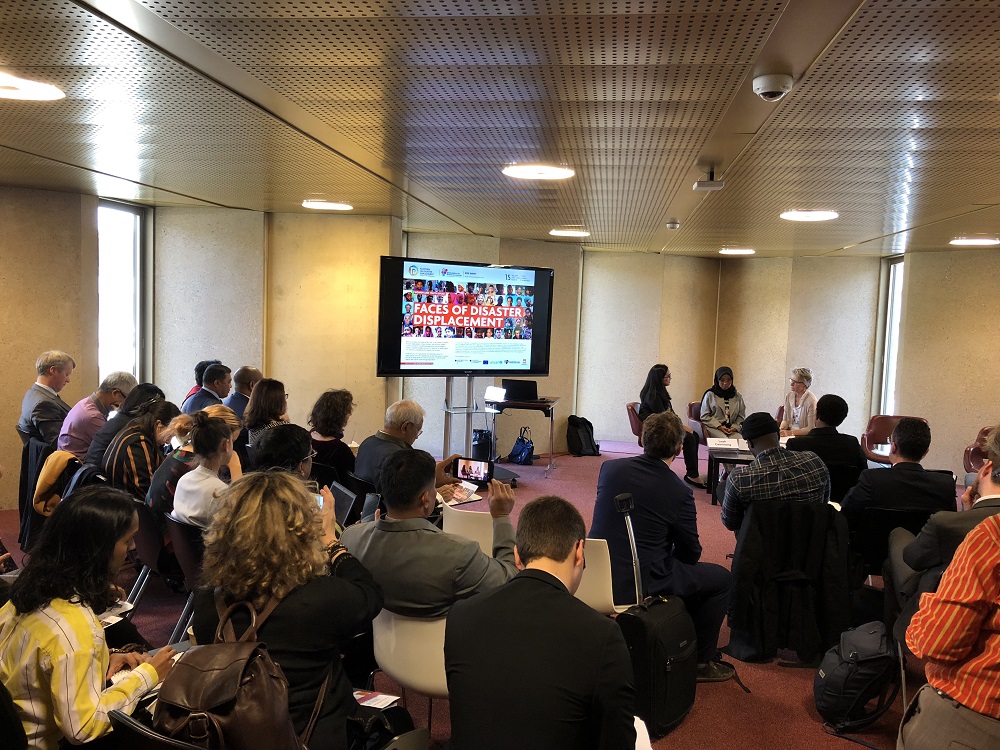 Attorney Leah Caminong and Ms. Nur Safriti Lasibanj held a whole room in silence. Telling their own stories of how they had been displaced in the context of disaster during the Global Platform for Disaster Risk Reduction (GP19) side event “Women and Youth Speak: Faces of Disaster Displacement”, brought the realities of disasters to a full room and interested audience of DRR policy makers and practitioners from around the world.

Opening the side event, Atle Solberg, Head of the Platform on Disaster Displacement (PDD) Coordination Unit, shared that in 2018, 17.2 million people have been displaced in the context of sudden-onset disasters, according to newly released estimates by the Internal Displacement Monitoring Center (IDMC). Of these 17.2 million people, not everyone is equally affected by disasters and specific needs related to age and gender have to be addressed. Leah Caminong and Nur Safriti were present to share their personal stories of disaster displacement and highlight these needs.

Leah is a 29-year old woman from the Philippines who has been working as a Disaster Risk Reduction and Management Officer in Dulag town since 2015. Leah was forced to leave her home when tropical cyclone Haiyan/Yolanda hit the Philippines in 2013. She, her sick mother and her relatives were evacuated to a community centre that functioned as a shelter, although not very effectively. Although their family home had been partially destroyed, they returned to share the house with 25 relatives after the disaster. Being asked about the role of the municipal authorities, she recalled that “the municipal level was also affected. They were likewise rescued. The community underestimated the power of the typhoon”.

We thought we were prepared, but what happened was beyond what we had ever imagined.

Nur is a 23-year-old woman from Indonesia working for a local NGO called the Sikola Mombine Foundation. On 28 September 2018, Nur was displaced by the Central Sulawesi earthquake (which led to a tsunami), where she lost all her local relatives. She had to interrupt her studies as the university faculty building was destroyed in the earthquake and she supported the earthquake response for a month: “there was a spirit to help other victims with volunteers and communities”.

I never imagined I would be a refugee. I never knew I lived in a disaster-prone area.

Both women underlined the importance and necessity of response and help at municipal level, but also at national level during a displacement. They also called for better shelters and responses against sexual harassment in situations of disaster displacement.

Two discussants responded to the experiences raised by the women and translated their experiences into policy recommendations. Ms. Esline Garaebit from the Government of Vanuatu stressed the importance of engaging communities in Early Warning Systems, by identifying champions and simplifying technical language to make it understood by all. Mr. Erling Kvernevik from the Civil Protection Agency of Norway, underlined the need of disaggregated data to obtain a better understanding of the phenomenon and emphasized the importance of strengthening human capacity at local level.

Concluding this side event, the Federal Government Commissioner for Human Rights Policy and Humanitarian Aid of Germany, Ms. Baerbel Kofler, pledged Germany’s support in the protection of disaster displaced persons ensuring the inclusion of vulnerable persons, women and youth in disaster risk reduction. 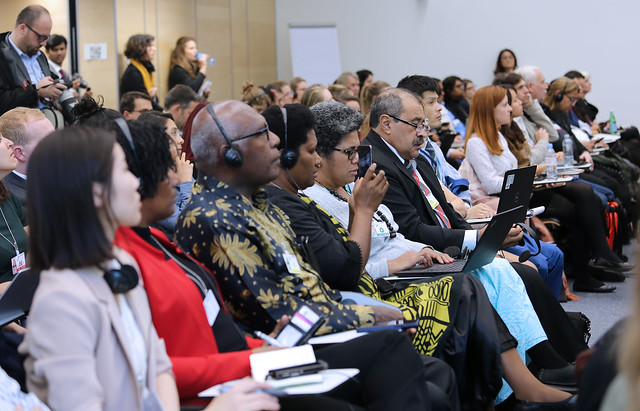 For information on the Words into Action on Disaster Displacement Guidelines launch at GP19, you can read our article.

For information on the Working Session on Disaster Displacement and DRR, you can read more on the IISD website.